What is Multi-threaded Programming? 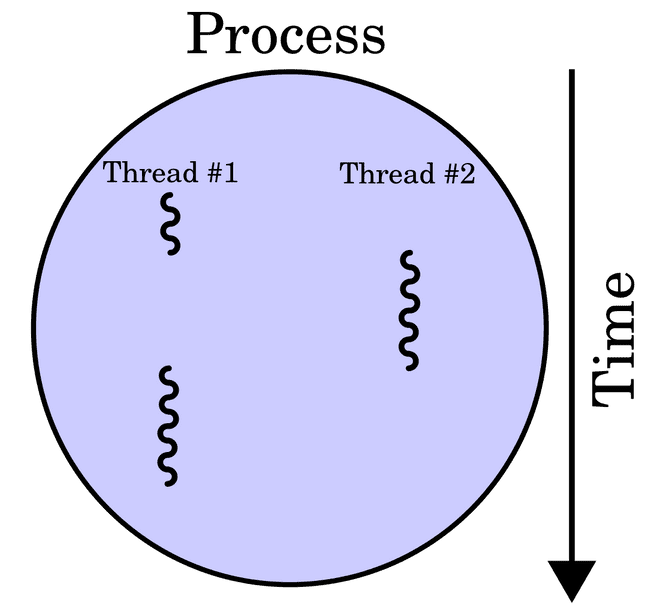 Multi threaded programming is a design approach that splits work into smaller units of work and distribute them among a collection of workers or threads that can solve the individual job concurrently. Imagine that you and your friends are trying to make a pizza. It would not make sense for everyone to make the dough and then make the sauce and then cook it. Instead, one person can make the dough while someone else can make the sauce and preheat the oven.

Process - When you are running any program, you are in fact running a process. For instance, you downloaded an application on your computer. It is sitting idling on your computer(like a lot of things we download and never use), it is not a process. When you open the application and it is actively running woahla! It becomes a process. Note: you can have more than one process of a program.

Thread - A process will always have one thread commonly called the main or parent thread. However, a process can have more than one thread. A thread that is created in the main thread is called the child thread.

So what happens when you create a thread? Thread creation will usually accepts a routine or function that will get invoked when the thread execution begins. When the child thread is executing the function/routine, the parent thread will continues execution unless a wait is invoked.

“Memory… is the diary that we all carry about with us.” ~ Oscar Wilde

Look at the main function

We initialized two array A and B. Note the -1 indicates the end of array. and we declared two struct pthread_t: t_a and t_b. Then we called sem_init(&mutext)which will initialize the mutex struct, for now you don’t have to worry about sem_t mutex and sem_init(&mutex, 0, 1), sem_wait(&mutex), and sem_post(&mutex). In short they are the key parts of synchronization and protecting the critical section problem.

To prevent this from happening, we use pthread_join( t_a, NULL) which will cause the parent thread to wait for the child thread t_a to terminate before continuing

So what does the child threads do?

The two child threads will each run this function void *add(void*args) to compute the sum. Note: the sum is a global variable. Where does global variables live in the memory space? In the data section. Which sections are shared by threads? data, heap, and code/text. My point is: both pthread_t t_a and pthread_t t_b can access the int sum = 0

First we have to convert the parameter void *arg into a int *ptr because we passed in the int array when creating the thread and the variable name of the array : int A[4]= {1,2,3,-1} in other words, A stores the pointer to the first element of the array. If you want to learn more about pointers click here.

we loop over the array. Ignore the sem_wait(&mutex) and sem_post(&mutex) these functions are again part of the synchronization and critical section problem. . For now, just pretend that they were not there.

Once both child threads finish looping through their array and terminates, the parent thread will continues execution and print the total

I highly recommend copying the entire code section above and running it using gcc -o OUTPUT_FILE_NAME src.c -pthread. Here, src.c is the C source code file you copied into. OUTPUT_FILE_NAME is an arbitrary name of your executable and -pthreads will link the pthread library. Run the program using ./OUTPUT_FILE_NAME. Mess around with it and have fun.